Our customer in Suwanee’s Grand Cascades subdivision had a very tall 12 ft. cross tie timber retaining wall beginning to buckle under the pressure of the driveway and the 4 SUV’s which drove and parked atop it nightly. 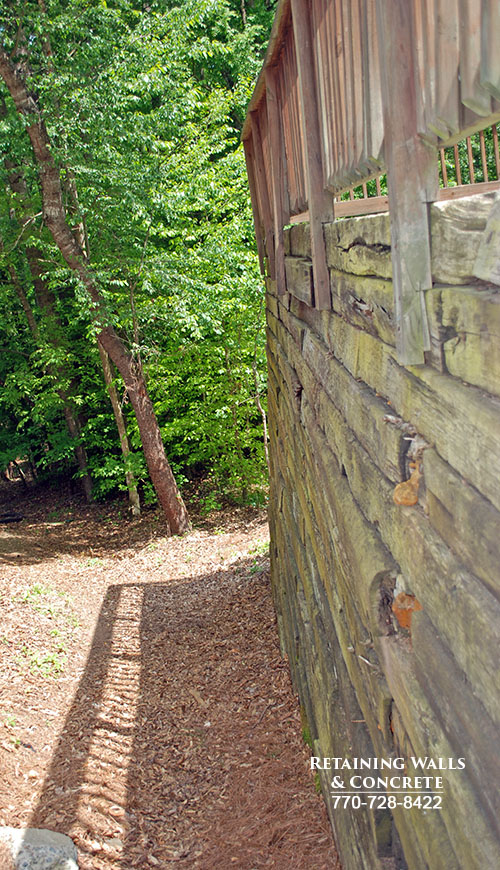 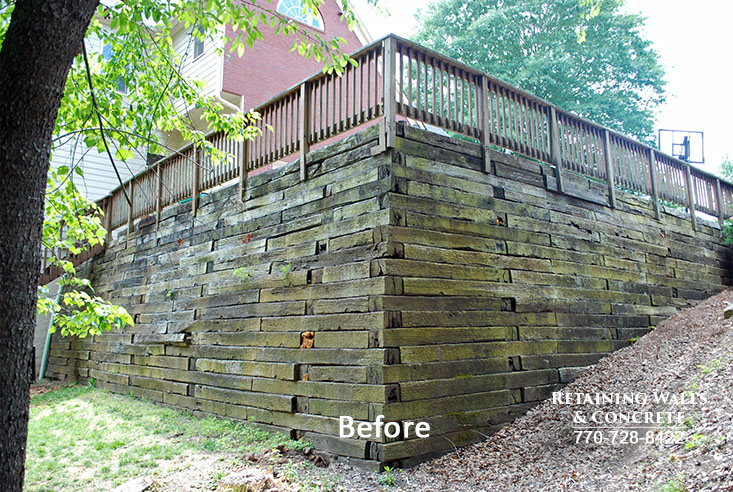 One of the most important issues with any retaining wall system is the drainage; which, as you can see in this image was installed before the first row of block, or retaining wall footer, was positioned. 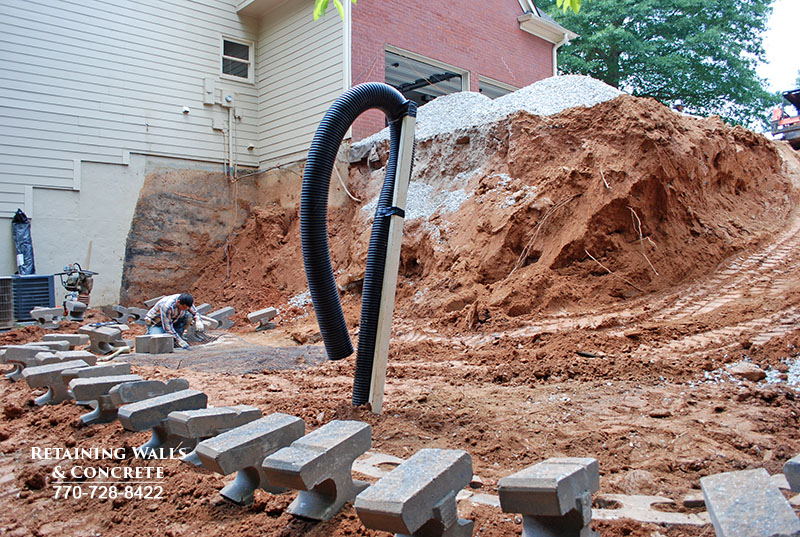 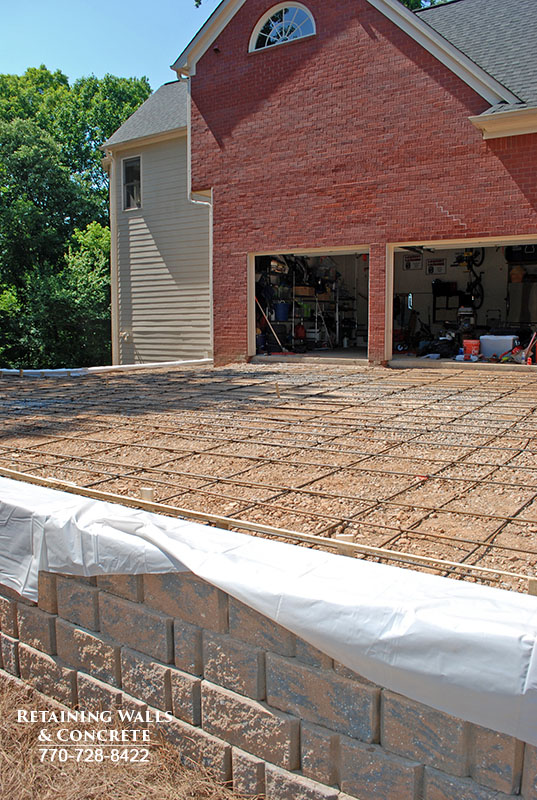 The homeowner also requested that the driveway on top of the retaining wall be extended forward so that his children could park their cars without blocking the driveway entrances where he and his wife parked. 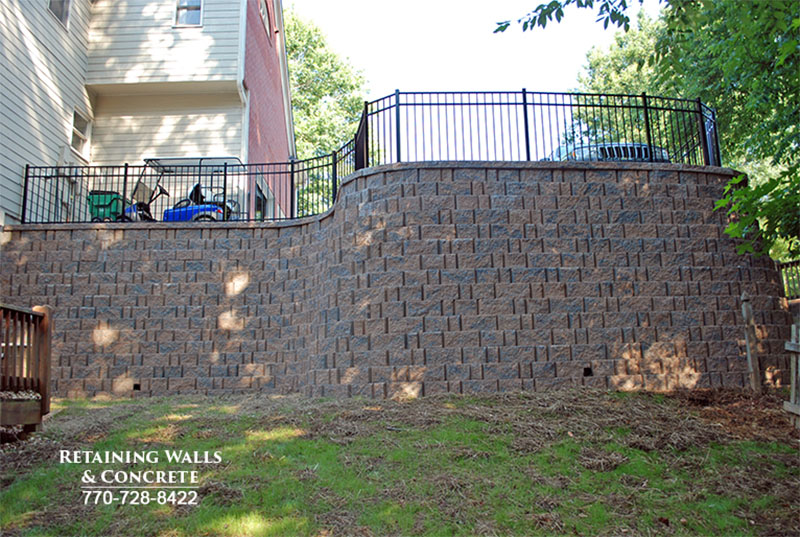 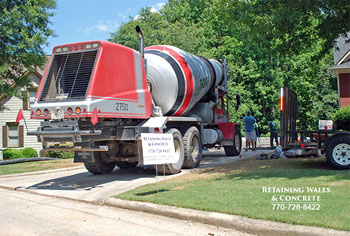 For the retaining wall itself, the homeowner chose a classic colonial style block. 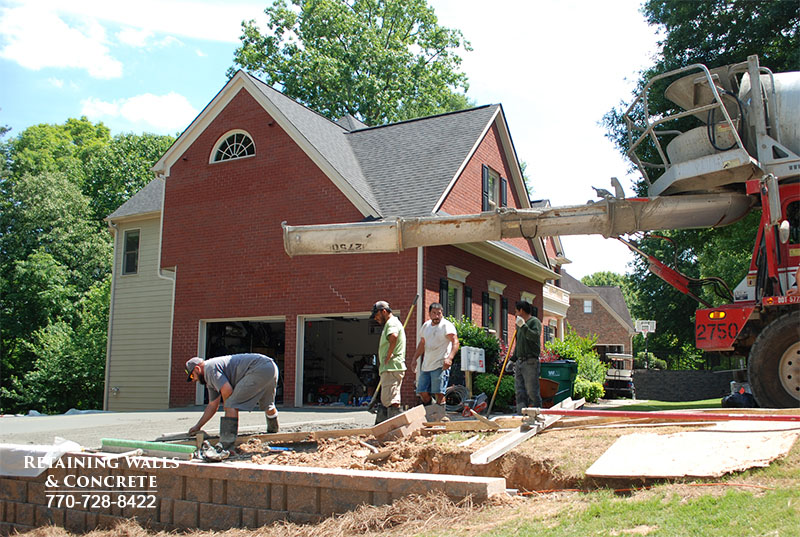 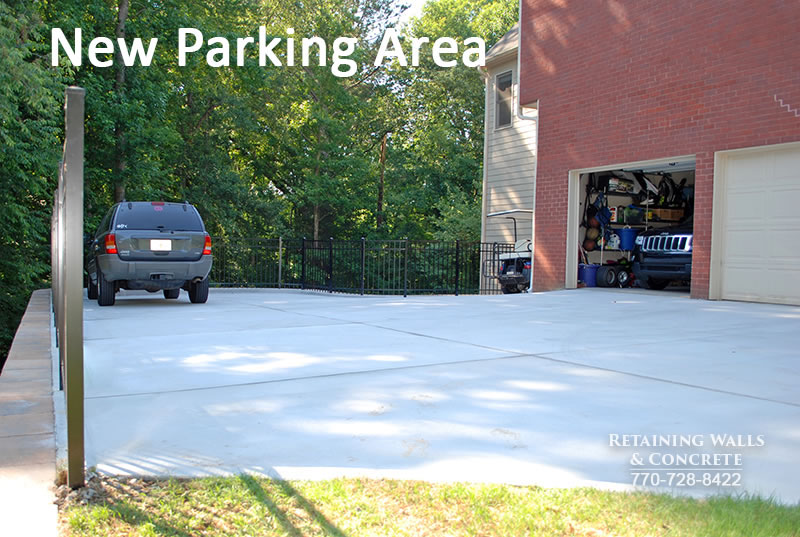 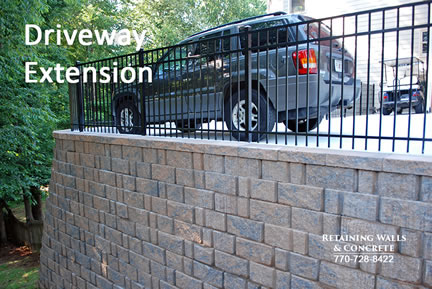 The most common estimate request we receive from homeowners, the replacement of a cross-tie or timber retaining wall that is either rotten, leaning or has already fallen. This customer living in the Suwanee, Georgia Highland Lake subdivision requested our service after the retaining wall failed.

As you can see from the images below, the retaining wall timbers had become rotten over time and were no longer capable of holding back the hydraulic pressure which occurs during a rainstorm. This will inevitably cause any rotten retaining wall to collapse. Unfortunately, the failed retaining wall caused a landslide that has placed the entire property in jeopardy. If you are in this situation, please do not hesitate to request a free estimate on a replacement wall. 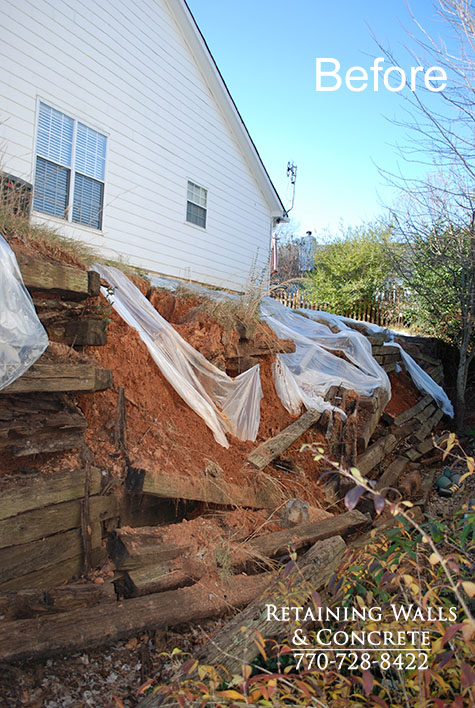 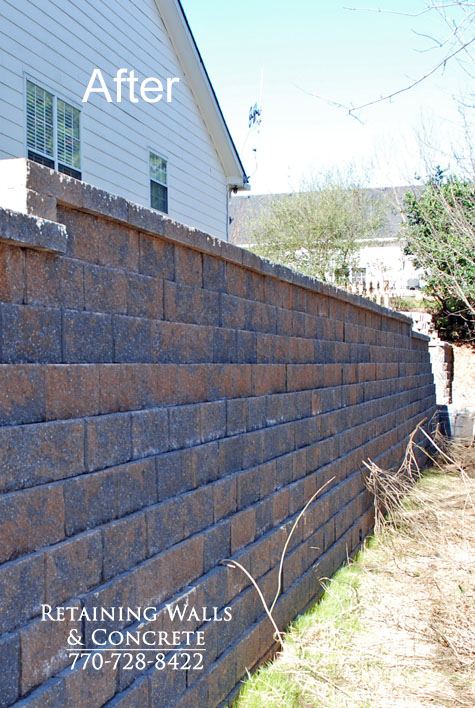 The alarming rate at which the earth was eroding after the retaining wall collapsed, and the close proximity to the house required that our engineer and project manager formerly petition for an expedited building permit in order to avoid a deteriorating situation in which the house could slide off its foundation. 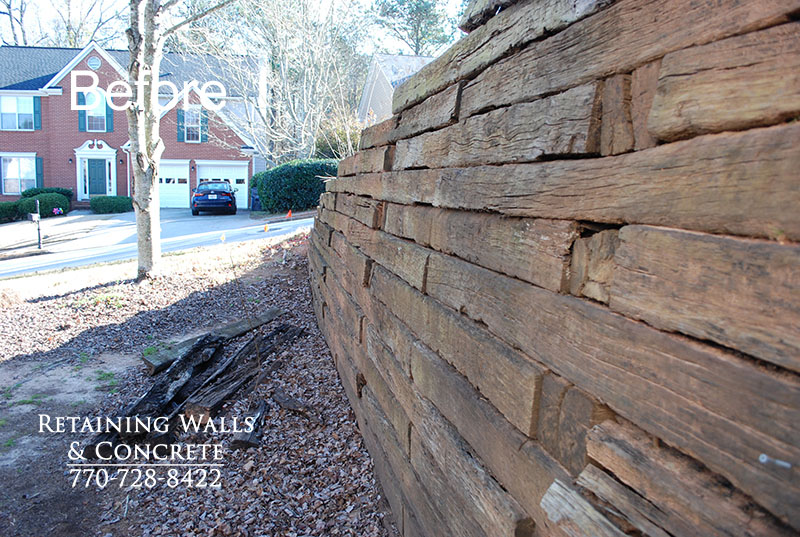 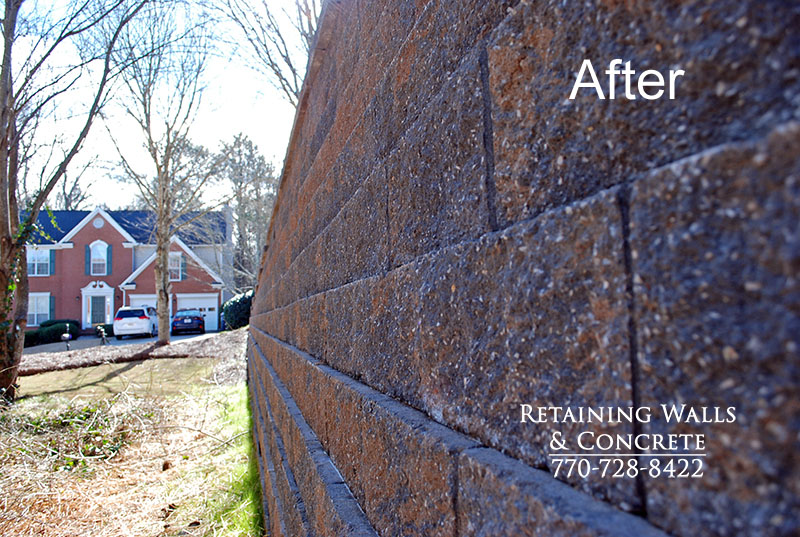 Thankfully the building permit clerk worked diligently to process our paperwork the same day and we were able to build the replacement retaining wall system before the next rain began.

This retaining wall and concrete driveway replacement project was also for a homeowner in Suwanee.

Believe it or not, this landscape timber retaining wall was just five years old when our assessment was requested.

Leaning and bulging retaining walls over five feet tall can be extremely hazardous and require the immediate attention of a licensed retaining wall professional.

This retaining wall was twelve feet in height and supported a driveway making it an extremely unsafe structure. 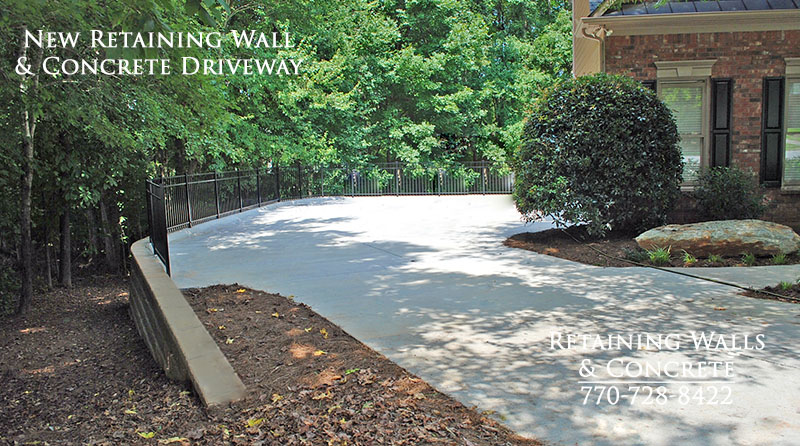 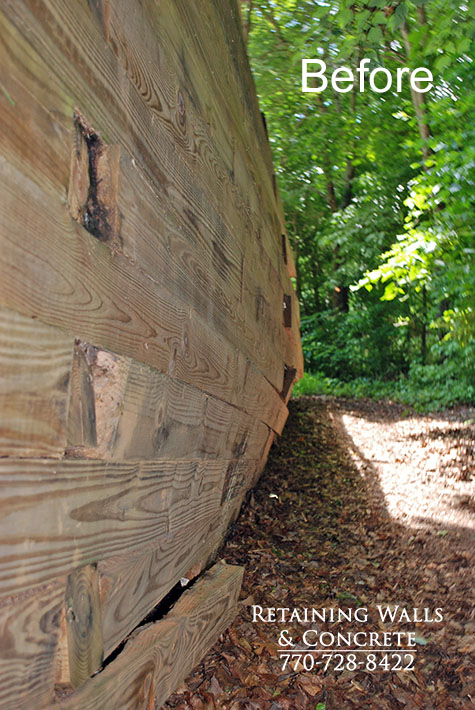 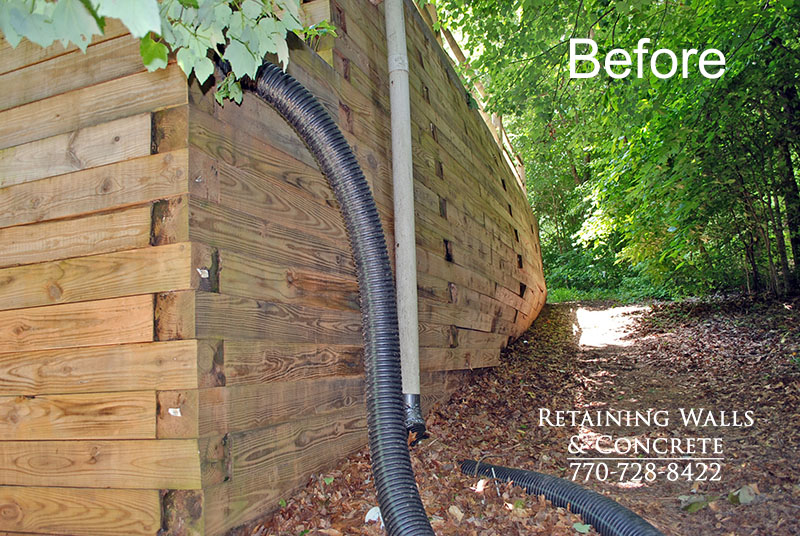 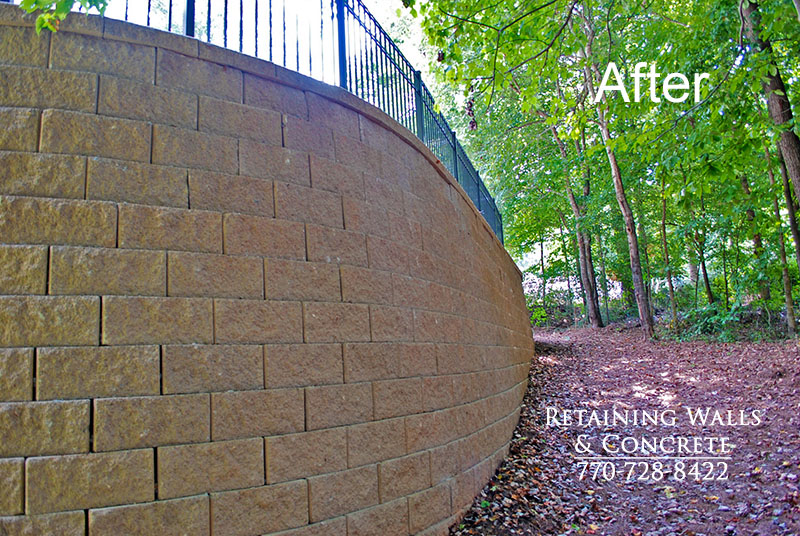 The homeowner conducted a great deal of research into the reason his retaining wall failed so soon after it was built. He discovered that landscape timbers are not treated in the same way that cross-tie or railroad timbers once were.

New regulations prohibit some of the most effective treatments that once made timber such a reliable and long lasting retaining wall building material. Which is why the homeowner decided to replace the retaining wall with segmental block.

Do I need a permit to build a retaining wall in Suwanee, Georgia?

First determine if your property is located in the City of Suwanee or Gwinnett County.